The Sa` used by the Messenger

Question :What was the amount of a Sa` in handfuls as was used by the Messenger (peace be upon him)?

Answer : What has been verified for us regarding the Prophetic Sa` is that it is four handfuls of a moderate-sized man. This is what was mentioned by some Muslim scholars such as Ibn Al-Athir in his book Al-Nihayah and Al-Fayruzabady in his book Al-Qamus. As for the Sa`s which we find in markets or Masjids (mosques), as mentioned by the questioner, they differ regarding their quantity. Thus, the estimation of a Sa` should rely on what was mentioned by scholars as explained earlier and Allah knows best.

May Allah grant us success. May peace and blessings be upon our Prophet Muhammad, his family, and Companions.

Posted by almuhsinoon on July 13, 2015 in Uncategorized

A Reminder Concerning the Attribution of Words and Works.

Posted by almuhsinoon on July 4, 2015 in Uncategorized

Posted by almuhsinoon on May 17, 2015 in Uncategorized

Some Fatwaas on the Ruling over month of safar

25 Nov
Tawassul made in Safar

Posted by almuhsinoon on November 25, 2014 in Uncategorized

Posted by almuhsinoon on October 20, 2014 in Uncategorized 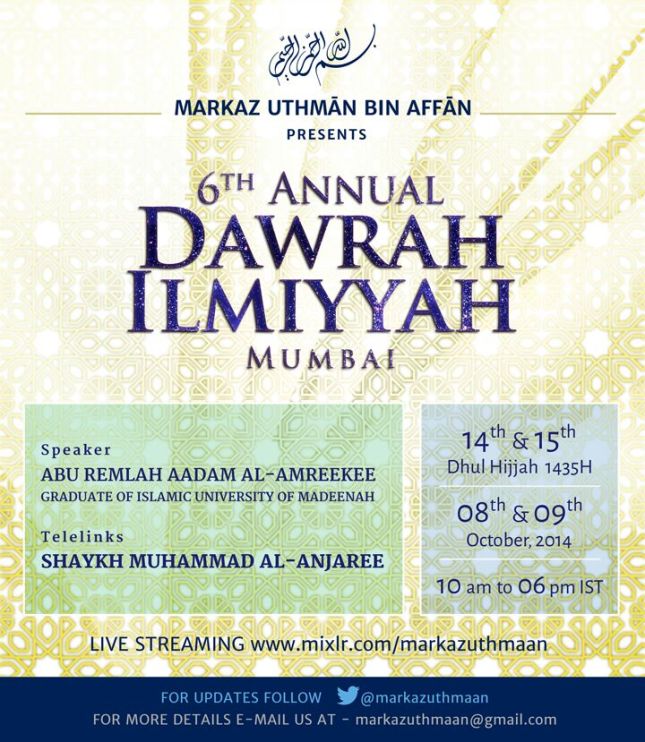 Posted by almuhsinoon on October 7, 2014 in Uncategorized

Do You Really Want Paradise?

This should be our goal in life, “I want to go to Jannah (Paradise).” It should be written in bold letters on our foreheads so that it serves a constant reminder for us. The Prophet has left with us a very small key to Jannah, which we muslims today have become oblivious of. Just like you need a key to open your car’s door, or hous door, or office door; similarly you need a key to open Jannah to you. What is this key?

Prophet said,”Whoever goes down a path/road searching for knowledge, Allah will make it easy for him the road to Paradise.” [Saheeh Muslim, Vol.3 Hadith No. 99]

Travelling on the path to knowledge refers both to walking or driving along an actual road/pathway, such as going to Conferences, etc..or going to your local Masajids whenever there is either an international scholar/speaker or a local scholar/speaker speaking. Searching also entails, a metaphysical road, such as stydying and memorising Quran and Hadeeth. Not merely memorising like a parrot, but understanding it first and then memorising it.

Continue Reading An Excellent Piece of Advice Down Here:-
spubs.com

Posted by almuhsinoon on September 23, 2014 in Uncategorized

Covering in front of in-laws

Some Narrations from the Salaf about Gratitude (Shukr)

Some Narrations from the Salaf about Gratitude (Shukr)

a) Abu Huraira -Radi Allaahu anhu- said: ‘Whoever sees someone being trialed and says: ‘All Praise to Allah who has pardoned me from that which you have been afflicted with and favored me above you, and above all of His creation’, then he has indeed given sufficient gratitude (Shukr) for that blessing.’ [Taken from ‘Udat-us-Sabireen’ by Ibn al-Qayyim p.280]

Read Rest Down Below:-

Posted by almuhsinoon on September 23, 2014 in Uncategorized

Allaah (The Most High) said:

”And recite (O Muhammad) to them the story of him to whom We gave Our Ayat (proofs, evidences, verses, lessons, signs, revelations, etc.), but he threw them away, so Shaitan (Satan) followed him up, and he became of those who went astray.” [7:175]

”And had We willed, We would surely have elevated him therewith but he clung to the earth and followed his own vain desire. So his description is the description of a dog: if you drive him away, he lolls his tongue out, or if you leave him alone, he (still) lolls his tongue out. Such is the description of the people who reject Our Ayat (proofs, evidences, verses, lessons, signs, revelations, etc.). So relate the stories, perhaps they may reflect.’’ [7:176]

Allaah likens him—[the one whom He gave knowledge of the Book and taught him what was not given to others, but he abandoned it; followed his desires and preferred the Anger of Allaah over the Pleasure of Allaah; preferred the worldly life over the afterlife and preferred the created beings over the Creator]—to a dog, which is considered to be from the meanest of animals; among the lowest in status and the meanest in inclination.

Its desire does not exceed beyond its stomach (i.e. its desire for food). It is considered to be from the greediest (of animals) and most eager (for food). And due to its eagerness (for food), it does not go about except that it places its nose on the ground, whilst sniffing and roaming about greedily and eagerly. It does not cease smelling its anus besides all its other body parts. If a stone is thrown at it, it returns to bite it due to extreme greed. When it takes possession of a dead animal enough for a hundred dogs, it would not allow another dog to eat anything from it, except whilst growling and seeking to gain the upper hand due to eagerness, greed and covetousness.

Posted by almuhsinoon on September 19, 2014 in General